LOCAL LEGENDS: How one Calgarian's journey spurred her into action

CBC News Video – LOCAL LEGENDS: How one Calgarian’s journey spurred her into action
(Click to view)

First-generation Canadian Teresa Woo-Paw has broke though many barriers to fight against policies that cause family hardships. 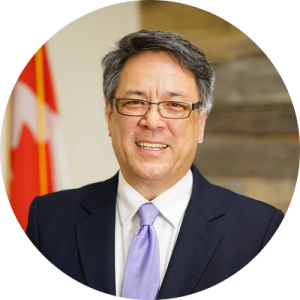 A great discussion with Daniel Quan-Watson, Depuy Minister of Crown-Indigenous Relations and Indigenous Affairs and Deputy Minister-Champion for Visible Minorities, organized by the Community of Federal Visible Minorities – CFVM. Daniel is the first Deputy Minister of Chinese ancestry in the Federal Government. Of the many key points he highlighted, an important one is how much is Canada losing when public institutions exclude talented Canadian just because of their colour or ethnic background.

OTTAWA—Bad America and all those extreme, right, white supremacists storming Capitol Hill. Thank God, it’s all there and not here in Canada. Well, that’s what we like to think. But think about some folks in Canada too. Derek Sloan, the former Conservative Member of Parliament who sought the leadership of the Conservative Party, winning a considerable 14 per cent of the vote, and after months of supporting all manner of far-right causes, was finally expelled for receiving a $131 donation from known white supremacist Paul Fromm. Then there’s the little sausage man from Winnipeg who crashed through the gates at Rideau Hall last July in a pickup truck full of ammunition. What brought him to Ottawa? The day before his gate crashing, as the Ottawa Citizen called it, there was a demonstration on Parliament Hill organized by Maxime Bernier and his far right party. Protesters wore yellow jackets and others held placards accusing Prime Minister Justin Trudeau of treason, among the other extremist allegations. Yes, the same Bernier who lost the Conservative Party leadership by a hair and whose path to political leadership was similar to Donald Trump’s. There’s also Bloc Québécois Leader Yves-François Blanchet who made slightly icky comments about Transport Minister Omar Alghabra saying in a press release, “questions arise” from Alghabra’s former role as head of the Canadian Arab Federation and his possible “proximity” to the “political Islamic movement.” So Blanchet kind of heard some people asking questions, but wasn’t asking the questions himself. It’s odd to make such baseless allegations, especially when Blanchet said his blood ran cold last summer when he was accused of anonymous allegations of sexual harassment. Surely then, he, more than most, can be expected not to engage in sleazy rumour mongering, and so brazenly. Unless he thinks there is an element out there who like this kind of racial innuendo. Leaders make conscious choices about when to push the line, and every time they do, they take our politics down a notch forever. There’s also the group known as the Proud Boys, a major player among white supremacists in the U.S. The group was founded by a Canadian and has active members here in Canada, including, most notably, in the Canadian Armed Forces. That’s something to be proud of. In March of last year, the completely unarmed Athabasca Chipewyan First Nation Chief Allan Adam was violently tackled to the ground, beaten and bruised, during a check for validity of a licence plate. He was charged for resisting arrest which was soon dropped. It’s hard not to compare this RCMP action, with the RCMP actions taken with the sausage man who had a truck full of ammunition on the grounds of our head of state and head of government. His white-glove treatment included an hour of chit-chat before he was arrested. Surely, it was one of the most serious breaches of security in Ottawa and hard not to notice the difference in treatment between Indigenous Chief Adam and white sausage man. And by the way, why did a Bloc member in June refuse unanimous House consent for an NDP motion for a review of systemic racism in the RCMP? The list goes on: the gunman who shot five Canadians Muslims while at prayer in a mosque in Québec City; the growing presence of far right, anti-Semitic, neo-Nazi and white supremacist groups in the Armed Forces and elsewhere is a concern to law enforcement in Canada, although they themselves are not clearly free of such blemishes. These examples are about overt and shameless racism. Systemic or polite racism isn’t even the issue here—like the fact that our seniors care system is almost 100 per cent dependent on underpaid personal care workers of colour and immigrants who get minimal pay and no job security, and no one cares. Here’s one way to see it. We were founded in a manner based on inclusion of white people with origins in England and France (the “old stock” Canadians), to the exclusion of Indigenous peoples, referred to by other terms, even though they were here first and the Crown in far away England had issued a proclamation recognizing their rights in 1763 and signed treaties with them. From the 1960s on, we have been trying to gradually become a better society and we have been making headway with rights for Indigenous peoples, bilingualism, gender equality, and multiculturalism. That headway, coupled with significant non-white immigration, is challenging the cultural structure of dominance and subjugation. Equality is not comforting for all, nor supported by all. This breeds a pushback, a backlash, a white lash. We can either find ways to divide people and pit people against each other or we can bring people together. In America, it’s the Trump versus the Biden way, and the Biden way has just started last week. We need to think hard about how we avoid the Trump way here.

Andrew Cardozo is president of the Pearson Centre, and co-editor of The Battle Over Multiculturalism. The Hill Times Opinion MONDAY, JANUARY 25, 2021 | THE HILL TIMES

TORONTO, January 25, 2021—Recent events in the US have caused Canadians to internally examine the rise of extremism and hate speech within the world of online platforms such as Facebook, Twitter, and YouTube.  The findings of a poll conducted by the Canadian Race Relations Foundation and Abacus Data released today indicate that 93 percent of Canadians believe that online hate speech and racism are a problem, including 49 percent who believe online hate speech and racism are very serious problems.

“Hate speech and racism are things that have always been with us, but social media platforms allow them to be disseminated under the veil of anonymity to much wider audiences, “said Mohammed Hashim, Executive Director of the Canadian Race Relations Foundation.  “The fact that most Canadians see this as a problem, is all the more reason why our government needs to make online hate speech regulation a policy priority.”

Despite the popularity of most social media platforms, the majority of Canadians—at least 60 percent—believe that the federal government has an obligation to put forward regulation to prevent the spread of hateful and racist rhetoric and behaviour online, while only 17 percent would prefer no government involvement. 23 percent remain unsure.

The poll also reveals that many Canadians are partial to several types of regulation around this problem.  Nearly 80 percent of Canadians said they would support regulation that would require social media companies to remove hateful or racist content from their platforms within 24 hours of it being posted.  Four in five Canadians would welcome strengthening laws to hold those who post hateful or racist content accountable for their actions.

As far as the policing of online hate and racist activity, 79 percent of respondents indicated that they would be in favour of regulation that would allow social media companies to inform law enforcement of perpetrators of particularly grave acts of hate or racism online before those activities turn to violence.

“The data collected in this poll is proof that most Canadians have seen what has been happening in the US over the last few years and are concerned with the damage that type of extremism could cause in the Canadian context,” explained Hashim.  “It is also evidence that Canada is far from immune to online expressions of hate and racism.”

Racialized groups, who make up nearly 20 percent of the total Canadian population, are particularly vulnerable to online hate.  The survey indicates that racialized groups are three times more likely to have experienced racism online than their non-racialized counterparts. This comes on the heels of police reporting a seven percent rise in hate crimes across the country in 2020.

While social media remains the most widely used platform to freely express various points of view, Canadians are concerned with its ability to rapidly promote and spread dangerous rhetoric.  By a two to one margin, Canadians are far more troubled by the impact of online hate speech on their fellow citizens than they are with curbing freedom of speech or restrictions to personal privacy.

“While there is legislation around hate in the real world, cyberspace has not received the same level of legislative diligence,” said Hashim.  “We are encouraged that Canadians appear to be willing to support a strong framework for ensuring we minimize hate and harassment—even in the darkest corners of virtual society.”

About the Online Hate and Racism survey:

The survey was conducted with 2,000 Canadian residents from January 15 to 18, 2021. A random sample of panelists was invited to complete the survey from a set of partner panels based on the Lucid exchange platform. These partners are typically double opt-in survey panels, blended to manage out potential skews in the data from a single source.  The margin of error for a comparable probability-based random sample of the same size is +/- 2.2%, 19 times out of 20.  The data were weighted according to census data to ensure that the sample matched Canada’s population according to age, gender, educational attainment, and region. Totals may not add up to 100 due to rounding.

This survey was commissioned independently by the Canadian Race Relations Foundation, and the Government of Canada was not informed nor consulted in the creation of this survey.

Online Hate and Racism survey can be viewed and downloaded here.

About the Canadian Race Relations Foundation:

The Canadian Race Relations Foundation was created in 1996 to reaffirm the principles of justice and equality for all in Canada. The mandate of the Foundation is to facilitate throughout Canada the development, sharing, and application of knowledge and expertise in order to contribute to the elimination of racism and all forms of racial discrimination in Canadian society.

Abacus Data is an innovative, fast-growing public opinion and marketing research consultancy. They use the latest technology, sound science, and deep experience to generate top-flight research-based advice for their clients. They offer global research capacity with a strong focus on customer service, attention to detail, and exceptional value.

Abacus Data was one of the most accurate pollsters conducting research during the 2019 Canadian Election.

The woman jogger was coming towards her, and Canadian artist Christine Cheung wasn’t quite sure why.

“I was walking in the middle of the road and there was plenty of room around me. She yelled at me,” Cheung recalled in a video call from the small German town where she’s currently sheltering in place. “I don’t know why. Maybe she was just an aggressive person. I don’t know if she was being racist.”

Watch: Act2EndRacism is calling for other leaders to draw attention to the issue, especially as restrictions are lifted.
Watch: Trudeau comments on acts of racism against Asian Canadians (May 22 2020)
Read: Message from Michael Gottheil, Chief of the Commission and Tribunals, Alberta Human Rights Commission

The COVID-19 pandemic has impacted all our lives in many ways. Unfortunately, it has led to an increase in racism and discrimination towards certain groups of Canadians. Since the beginning of this crisis, minority groups in Alberta, especially people of Asian descent, have been the targets of racist comments, threats, and intimidation.

A network of Asian Canadians — including a former Alberta MLA — has formed in order to combat racism that has emerged during the COVID-19 pandemic.

Watch: Prime Minister: "There is no place for racism against Asian Canadians..."